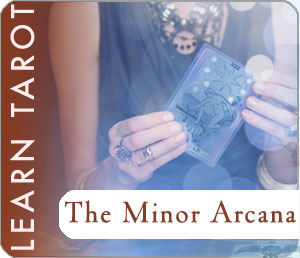 LESSON TWO, continued: What does the Suit of Swords mean?

In the Minor Arcana of the Tarot, the Suit of Swords symbolize the intellect as well as limitations that helps us grow. Swords help focus the energies grown in the preceding Suits of Wands and Cups, pruning weak branches from a tree so it may strengthen to bear fruit. When cards from the Suit of Swords appear in a tarot reading, they invite us to gain knowledge so we may take charge of our lives.

Here are definitions for each card in the Suit of Swords. 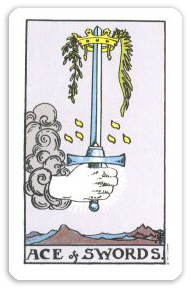 Meanings: Pure understanding and wisdom. The ability to wield the sword wisely to gain order. Clarity and good judgment. Reversed: Need for thought. Are you using your swords against yourself? Confusion. 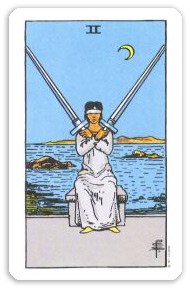 Meanings: Peaceful truce. Balance attained, but eventually issues will have to be confronted. Reversed: Discomfort with a decision that was made. Overreliance on intellect, leaving emotions unconsidered. An uncomfortable relationship. 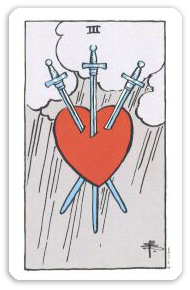 Meanings: A sharp pain to the heart—disappointment, end of a love relationship, separation. Sorrow that can enlighten or can debilitate. Oversensitivity. Reversed: Indulging in grief for the sake of drama. Slow easing of depression. 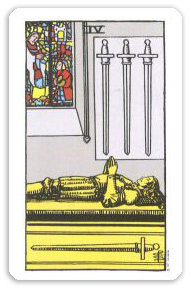 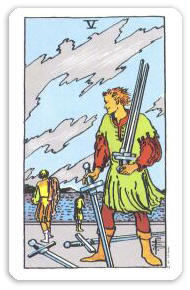 Meanings: An uncomfortable truce. Possible defeat, or feelings of defeat—but is it really over? Discomfort or struggle with a situation. Need for self-protection. Reversed: Defeat because of indecisiveness. Lack of trust. 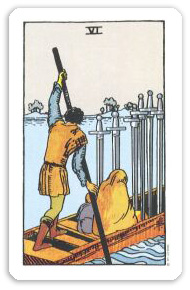 Meanings: New knowledge that helps one to move beyond current limitations. The lessening of difficulties. Travel. Reversed: More understanding of the situation is needed before it can change. Delays in departures, travel. 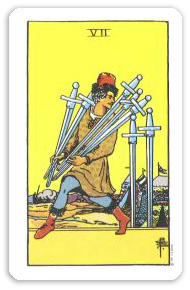 Meanings: The ability to defend oneself in a difficult situation. However, energy should not be placed in recriminations. Need for caution and examination. Reversed: Paranoia. Possible guilt. Need to protect oneself. 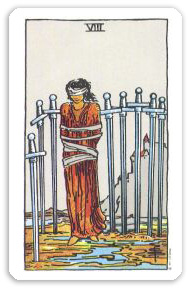 Meanings: Inability to move. Incapacitating depression. Feeling victimized or entrapped by others. Reversed: Obsession with problems to the detriment of others. Things may not be as bad as they seem. 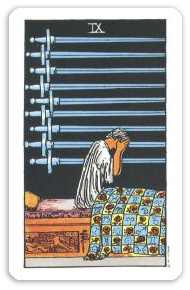 Meanings: Insomnia. Worries that keep one awake. An issue that needs to be looked at more closely; only then will it be transformed. A nagging anxiety. Reversed: The gradual fading away of these worries. Understanding. Someone close who is suffering from depression, anxiety, or illness. 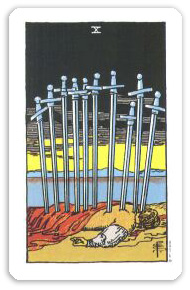 Meanings: The perfection of understanding. Wisdom gained after struggle. The ending of a difficult situation. Reversed: More needs to be considered before complete understanding can be gained. Overwhelmed by too much information—things need to be prioritized. 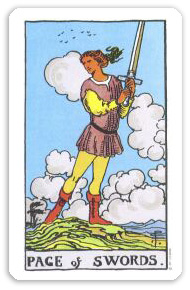 Meanings: News that brings sense to a situation. Messages, communications. The ability to create influence. Someone who personifies this role. Reversed: Waiting for news. Feeling inarticulate, unable to stand up for oneself. Confusing messages. 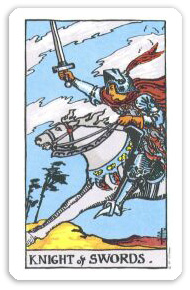 Meanings: Incisive movement. Cutting through confusion. Focus. Reversed: Not understanding as much as one would like to. The desire to move, but feeling thwarted. 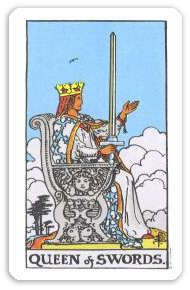 Meanings: Dazzling intellect and understanding. The ability to clarify through language. An older woman who has these qualities. Reversed: May symbolize loss or wounds; for all her good intentions, sharp words can cut deep. 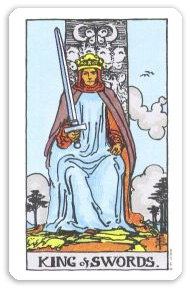 Meanings: The ability to bring calm authority to a situation. A helpful older man who won't sugarcoat his words. Incisive intellect. Reversed: Wanting authority to take over to avoid responsibility. Placing too much trust in the intellect. Being too critical.