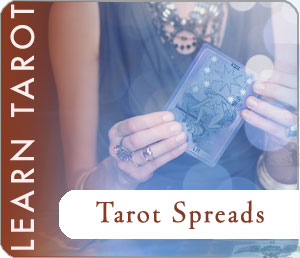 LESSON FOUR: How do I learn to read the Tarot?

Learning to read the Tarot is fairly easy! Most tarot readings involve placing a number of cards into a preordained pattern called a spread. Each card position in a spread symbolizes an area of the question to be explored during the reading. There are as many tarot spreads as there are questions. Different tarot spreads fill different purposes—some are contemplative, others predictive.

To get you started reading the tarot, three free tarot spreads are offered below with instructions. These are presented in order of difficulty—from simplest to the complex—allowing you to progress as you gain confidence and skill.

1. Before you choose the cards for your tarot spread, a question needs to be offered. How to phrase this question is an important consideration. Generally, questions that receive the best responses are those which are posed with the greatest thought and clarity of intention.


3. Shuffle the cards. You can shuffle them a preordained number of times, before cutting the deck and choosing cards from the top—some like to shuffle the cards seven times for luck. Or you can just mix the cards up until they feel "right" and choose cards at random.

4. Before you shuffle your cards, decide whether to include reversed, or upside-down, cards. Reverse cards can be created by turning some of the cards around as you shuffle. Some people believe that reversed cards show where energy may be blocked or attention needed in a situation. Others believe all the information you need is contained within the seventy-eight cards of the Tarot. Again, this is up to you.

5. Lay out the cards to match the diagram in the spread. When you look over the cards in your reading think of each one as a chapter in a story being unfolded. What do the pictures say? How can this story be changed, if change is desired? What lesson is being taught? What challenges offered? (At this point, don't stress if you don't remember all the meanings for each card. Just look them up as you go!)

6. As you look over the tarot spread, also take note the proximity of the cards to each other. Is there a preponderance of one suit or arcana? For example, a tarot reading comprised of mainly Major Arcana cards could suggest major life transitions; a majority of pentacle-bearing cards a focus on financial issues.

7. Emotions and memories may also surface while you gaze at the cards. Take note of them—they add relevance to a reading.

The Past-Present-Future* is one of the simplest spreads you can do, which makes an easily accessible introduction to tarot reading for newcomers. It's great for when you're short of time, but need a quick overview with advice on how to proceed. The Past-Present-Future is particularly suited for simple questions that do not require deep examination.

To begin: Shuffle and choose four cards at random from your deck. Lay them out as shown in the diagram above. Each card is placed face down; it is turned over as it is examined.

Card 1: This card represents the past, or foundation, of the matter under consideration.

Card 2: The present, as thing stand now. This card reflects the current situation.

Card 3: The possible future, if things continue as they have. (If the card you've chosen to represent the future isn't something you're satisfied with, take steps to change it.)

Card 4: The overall message, or lesson, of the spread. This card is a summation of everything examined.

*Want to see this spread in action? Try an online Past-Present-Future reading.

The Burning Question* is slightly more complex than the Past-Present-Future. It's for those times when you have a question that needs to be immediately answered—a burning question, if you will. A card symbolizing the question is placed at the center with the remaining six cards placed around it, suggesting the shape of a flame as it clings onto an object. Spread created by veteran tarot reader Laura Mead-Desmet. 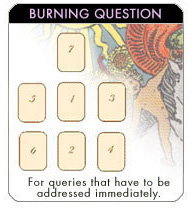 To begin: Concentrate on your burning question at hand. Then shuffle and choose seven cards at random from your deck. Lay them out as shown in the diagram above.

Card 1: The burning question itself. This card sums up the situation requiring immediate guidance.

Card 2: Supporting influences or obstacles in reference to the burning question.

Cards 3 and 4: These cards refer to the hopes and fears concering the burning question.

Cards 5 and 6: These cards offer addition information to be considered before a decision is made

Card 7: The possible outcome, if things continue as they have. (If the card you've chosen to represent the outcome isn't what you want, take steps to change it.)

*Want to see this spread in action? Try an online Burning Question reading.

The Celtic Cross* is one of the most popular tarot spreads because of its ability to cover several aspects of a situation in depth. It features six cards in a distinct cross pattern, with an additional four cards along the side. 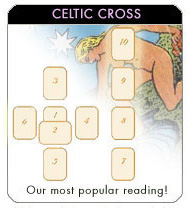 To begin: Choose a card signifying the person asking the question. This card is known as the significator. The usual way to do this is to select a court card—page, knight, queen, or king—with similar attributes to the person. For example, a young woman with artistic talents could be represented by the Page of Cups; an older man with a fiery temperament, the King of Staves. After the significator is chosen, the deck is shuffled and ten cards chosen. Lay them out as shown in the diagram above; the significator is placed beneath card 1.

Card 1: This card represents the overall situation surrounding the significator regarding the question being asked.

Card 2: What is influencing the situation for better or for worse. Factors to be considered.

Card 3: The foundation of the issue. What is supporting it at this time.

Card 4: The past, or influences passing way.

Card 5: What is on the significator's mind at the time.

Card 6: Near future, or influences coming into play that must be considered.

Card 7: How the significator perceives the situation, and how it's influencing them.

Card 8: How others view the significator in this situation. Ways they may help or hinder.

Card 10: The outcome if things continue as they have been. This card is a reflection of how things stand at that moment—depending on the course of action taken, it can be changed.

*Want to see this spread in action? Try an online Celtic Cross reading.