Today’s transiting moon in Pisces may leave you feeling all misty and sensitive. After all, Pisces is is associated with the planet Neptune, the planet of mysticism and higher love, and Jupiter, which amplifies everything. With such expansive energies bandying about, it’s easy to overindulge in escapism. Instead, listen to music, perform acts of compassion, and watch your imagination soar. Don’t be afraid to let yourself dream a little bigger, darling.

Current Moon Phase: The moon is waxing in its second quarter phase. Second quarter moons invite you to check in on your goals: how’s your garden growing? If you’re happy and you know it, keep working your plan; if not, make adjustments as needed. Want more daily insight? Check out our new Numerology reading! 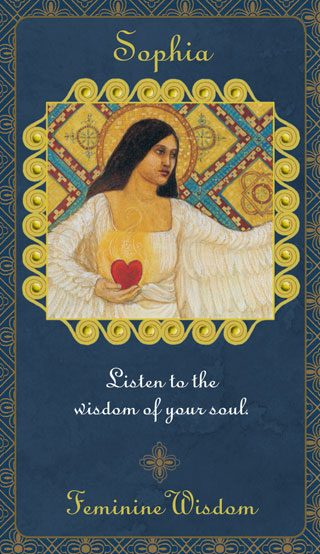 More about this Goddess: The goddess Sophia is considered the divine embodiment of feminine wisdom; her name translates as “wisdom” in Greek. In the ancient Near East, Sophia provided humans with the knowledge needed to create literature and the arts. Sophia symbolized the soul in its purest manifestation; she is often represented in art as having the form of a dove. Later history associated Sophia with the Holy Spirit in Gnosticism. Gnosticism grew alongside early Christianity. Some gnostic traditions even claimed Sophia as the mother of Christ. An important tenet of Gnosticism held that knowledge could free humanity from the shackles of limitation. Like to know more? Try a Goddess Inspiration reading.